I'm unsure whether it's the same taxi driver that hunts me all the time, or there are so many of them operating the C class 200/220 CDI variants. Either way, every time the story goes in the same direction. Usually it's me thrilled by the comfort of a Mercedes more than 10 years old, even though I personally drive a brand new car. It's like riding on shock absorbers made of cotton wool. The driver then gets all emotional about it and proudly states that the "Merc" is more or less in factory condition, although he imported it from a Munich TAXI driver when it had 350.000km on the ODO. It has done 150.000 since but it still "purrs" and makes no troubles to its proud owner. 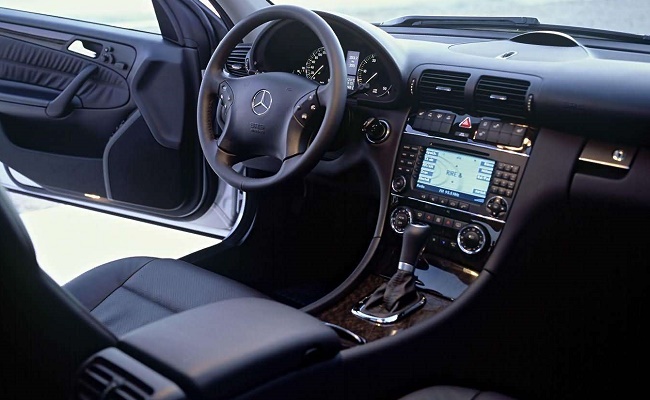 However, despite all the enjoyment in the C class, it felt refreshing when few days ago I sat, for a change, in a thirteen years old SAAB 9-3 TiD, operated by a middle-aged gentleman. He didn't seem to be in the business for a long time, in fact - except for the taximeter nothing was suggesting he's about to charge me for that ride. He lost his job a few years ago, he said, and decided to make a use of the car he couldn't sell in order to make some money. It was close to 400.000km on the ODO but no indication that the SAAB will give up any time soon.. 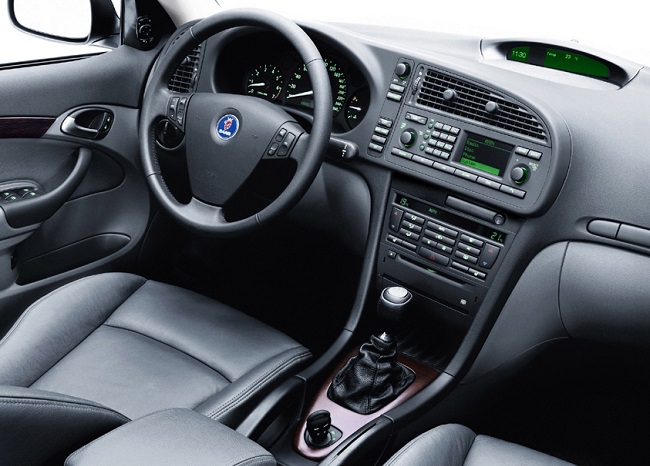 It's a fact that the Mercedes-Benz 2.2-liter diesel engines proved to be extremely reliable. This is confirmed by the fact that they are present in the market, in slightly modified form, for more than 20 years now. The specific variant is one of the least powerful but at the same time quite unladen, and while its 122 horsepower will not raise your adrenaline level, they will allow you to enjoy the ride along with a decent average fuel consumption of 6.3 liters of diesel per 100 kilometers. This has all to do with the common-rail system, which represents an improvement over the previous generation of C-class with which it shares the same engine block. However, it is the very same injection system that sometimes ensures those rare visits to the garage, as the injector seals are prone to fail and cause a relatively expensive problem if not treated timely and properly. Early diagnosis include nose and ears, due to the smell of the half-burned fuel which penetrates into the cabin from the engine compartment and the hissing sound of the mixture escaping the problematic cylinder.

SAAB is about half a liter of diesel thirstier than Mercedes, although the factory stated 5.7 liters on average in real life it consumes around 6.8 l / 100km. This somewhat makes sense because it is a bit heavier and accelerates just a bit better than its German rival. Its 2.2-liter Opel-designed turbo diesel engine is old-school, meaning that the nozzle could take a minor rat if needed and on this model injectors are not problematic at all. However, this comes in the package with an injection pump, a mechanism almost forgotten in the common-rail era. Fortunately, Astra, Vectra, Zafira and previous SAAB model in which these engines were installed, did not have frequent problems with this expensive component whose price in the store is just slightly lower than that of the whole car.

Refurbished pump for this model could be found for around 450 - 600 euro. What is a far more common problem for this engine is the notorious EGR valve solenoid which, especially with the low quality diesel fuel we tend to encounter on gas stations nowadays, fails to close and forces the engine into the limp-home mode which justifies its name in the worst possible way. Drivers are temporarily solving this problem by lubricating the mechanism with copper grease, but the only permanent solution is the replacement of the entire EGR which costs around 250 euro new.

Despite these problems, these two engines are at the top of reliability and proven diesel power-trains are able to withstand high mileage without any major intervention. It is worth mentioning that both engines have chains instead of timing belts, quality dual-mass flywheels and clutches.

When it comes to safety, these two cars are almost identical and estimated as an excellent choice for people who intend to test their vehicles against a highway bank, a wall or a lamppost. The passenger and luggage compartment are similar in size and fully meet the needs of an average family. The real difference is the price... SAAB is, as expected, significantly cheaper for several justified and just as many unjustified reasons. The main justified reason is the fact that there are Siamese twins that have been separated more easily than you will separate from your SAAB who will endlessly occupy space in the yellow pages. I know this because I had the good fortune to own two cars of this brand and bad fortune to have to sell them. The second reason is the possibility to encounter a shortage of spare parts made by this factory, which practically does not exist, and which are specific to SAAB, i.e. headlights, side mirrors, LCD screen of the central console and similar. When it comes to unjustified reasons, I would single out "What a hell is a SAAB!?" and fear of the maintenance difficulties of these cars which share all the major components with GM / Opel group. 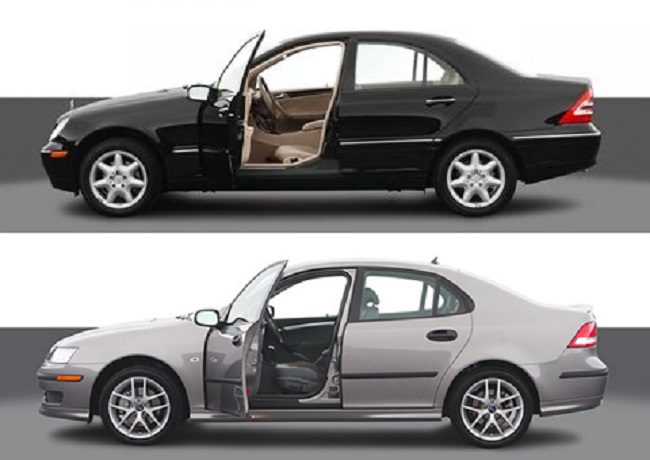 Mercedes, on the other hand, holds its price well and has always been easy to re-sell. Spare parts and service are available in every major city, but they are considerably more expensive. Something which is also not on the Mercedes side is the level of interest for this brand shown by the thieves. Although it is not even close to those shown for Renault or Volkswagen, it is infinitely greater than those for SAAB. More specifically, there's a greater chance that you will get some snow stolen in front of your house in the middle of the winter, than an unlocked SAAB abandoned somewhere in the ghetto with the key in the ignition. In the end, it all boils down to a matter of taste and needs of a particular driver, but the important thing is that you will not go wrong whatever you choose. If you prefer to change cars more often, SAAB might not be good for you and you may want to play it safe with Mercedes. If you are, however, willing to grow old together with your Swedish pet, there's no reason not to set sail in these waters. Later, in any case, you can always sell it to some taxi driver or, given the way in which our economy is moving, drive a taxi yourself as the gentleman from the beginning of the text.
Vehicle information - Mercedes Benz C