The Most Popular Used Car Models in 2020

THE MOST POPULAR USED CAR MODELS IN 2020


Searching for a high quality used car can be hard. Whether you have recently gotten your license and are looking for your first car, or you just want to downgrade to a cheaper model, a used car could be just the thing you are looking for. But how do you know what to buy? Fortunately, this list of the most popular used cars of 2020 should take a bit of the hassle out of deciding.

To conduct this study, searches via the carVertical database were analyzed, and a list of the most popular cars was compiled. These are not necessarily the most purchased cars, but the most searched for on the database. The study included the USA and most of Europe, analysing over half a million reports. The list is based on the percentage of popular car model history reports that were checked out of the total amount of reports checked on carVertical. The research is about used cars only. 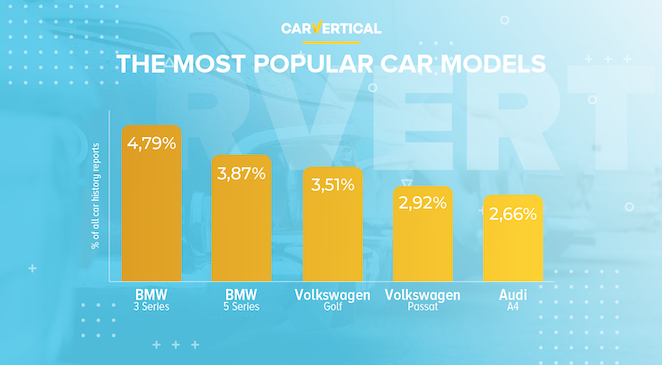 1. BMW 3 Series - 4.79% of all car history reports
The BMW 3 series tops the list of most popular cars of 2020, according to searches on the carVertical database. The most popular models by year of production were the 2012, 2007 and 2008 models, part of the fifth and sixth generations of this elegant and compact model that still feels as new as the day it was made. The 3 series is an astounding model that has been listed in Car and Driver magazine’s 10Best list 22 times.

2. BMW 5 Series – 3.87% of all history reports
The 5 series is the car for those looking to level up in class. This sleek model combines a sporty look with a “let’s do business” vibe. BMW itself calls it “the embodiment of the modern business sedan.” It is hard to disagree. The 5 series is a safe and efficient car. The most searched models by year were the 2010, 2011, and 2012.

4. Volkswagen Passat – 2.92% of all history reports
As with BMW, it seems people just cannot get enough of Volkswagen. You can’t blame them. The Passat is a larger, more family-friendly car than the Golf. The most searched for models were the 2016, 2012 and 2010, the last of which was the first of the new-look design, unveiled at the Paris Motor Show.


These five cars once again prove to be not only among the world’s most popular, but also the best for safety, efficiency, and design. These are cars for all types of people in all walks of life. Whether you are a business professional, a parent looking for a safe family car, or someone who just wants to impress with their first purchase, these are the cars for you.

Volkswagen and BMW are clearly the most popular make based on the searches of carVertical. If you include Audi, which is a subsidiary of Volkswagen, then VW has 3 cars in the top 5. It is fitting that the top five cars are all German makes. The quest for quality, durability and continuous performance means that these models are designed to be in top shape even after being driven for thousands of miles. These are cars made by manufacturers that love the art and science of car making.

The high quality, efficiency and safety of these cars goes a long way to explaining their popularity. These are award-winning makes and models. They are among the most common and famous car models in the world, which is really saying something. Millions of people buy these makes and models every year. These are not just among the popular and common cars, they are also some of the best cars in the world.
Vehicle information - BMW 3 Series