Blondes or brunettes, Snickers or Mars, cam belt or chain cam... All these are real concerns that plague us every day. When I say us, I mean me and my AutoManiac alter ego, since half of other people don't even know there's a difference, while the other half don't care even if they do. However, many will gladly participate when a discussion fires up on this subject, because they once heard something from a neighbor whose brother in law has a good friend mechanic.

Historically, cars were powered by chain-driven engines until mid 60's of the last century, when mass production timing belt units started to appear. The chain has always imposed as a natural solution, especially if you are mindful of the fact that first cars were actually developed from bicycles. Their role in internal combustion engines is relatively simple, but also extremely important because it is a component that connects the crankshaft to the camshaft, while synchronizing them at the same time. In this way a correct position of the valves in relation to the movement of the piston in the cylinder is achieved, that is, proper breathing of the engine.

Though simple, the chain began to lose the battle with the timing belt in the last third of the 20th century, and here are couple of reasons why:

1. Cost
As in every industry, the price of production and installation often dictates the technology as well, and a timing belt is nothing more than a piece of rubber reinforced with fiberglass or Kevlar fibers. This of course is significantly cheaper than the heavy metal chain.

2. Noise
The chain itself is noisy, and metal sprockets through which it moves are only contributing to the symphony of unwanted sounds. With increasing expectations from clients, many manufacturers were forced to move to a timing belts implementation in order to ensure an acceptably low level of engine noise in the cabin.

3. Function
Belt, unlike chain, requires no lubrication making it less complicated to implement, and is often used to drive the water pump as well, which is an additional advantage. However, it is also a concern because it is often the very same water pump that is responsible for a timing belt failure, in cases when it "seizes". 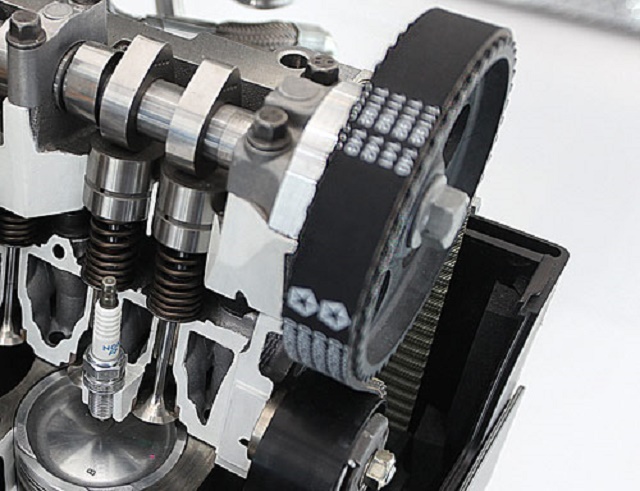 However, trends are changing and we are witnessing a worldwide return of timing chains to both petrol and diesel engines, and they are returning BIG! More and more manufacturers are opting for this solution, justifying it with some of the following arguments:

1. Durability
Although many manufacturers will define the check and replace interval for the timing chain, in practice the chain often outlast the car itself. People tend to say that these engines are major maintenance free, because there is no timing belt to be replaced, but the truth is in fact that the V-belt with all its rollers and tensioners still needs to be regularly replaced so these statements are not 100% accurate.

2. Reliability
Unlike the timing belt which is often known to fail without notice, usually when the engine is switched on or off - thus putting extra tension to it, chain will usually produce some weird rattle when loose, before actually making any damage.

3. Simplicity
The design utilizing a chain instead of a belt is often requiring less components and almost never includes the water pump, so preventively replacing that part is not needed nor is there a danger that the engine timing will become corrupted in case of its failure. 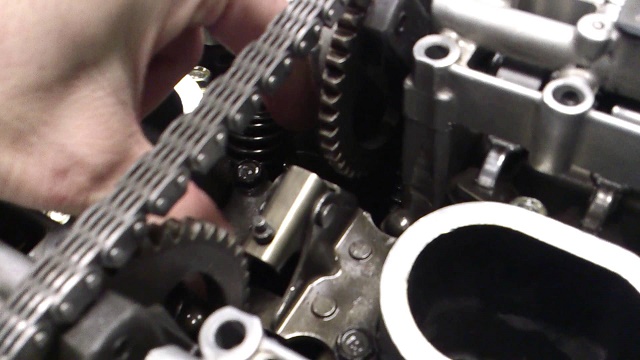 As expected, both approaches have their pros and cons, but what is most important in my opinion is understanding what happens when some of these two components actually fail. In the so-called interference engines valves in certain phases of the 4-stroke cycle encroach on the habitat of pistons, pushing their luck. Fortunately, the pistons at the same time retreat downwards in the intake or exhaust cycle and everything works beautifully thanks to the belt / chain. Just as with two neighbors, one of which puts a fence, and the other tears it down, everything is fine as long as they don't run into eachother. In engines, that meeting is usually provided by a belt when one or more teeth fall off, thereby disrupting the timing and making the two solid metal objects trying to occupy the same space at the same time, resulting in sounds most men would find chilling. Chilling later becomes freezing when the cost of repair, or sometimes replacement engine, are communicated by a mechanic.

Even though chain "falling off" and causing damage is not unknown, it is still very uncommon and is usually the result of improper vehicle maintenance, low oil level or pressure etc. Also, it is not unknown that manufacturers attribute a certain service interval for replacing the timing belt only to reduce it few years later when severe damages start to occur. The best example perhaps would be the FIAT's 1.9 JTD engine that, although excellent, requires timing belt replacement every 50,000 kilometers, mostly due to the notorious water pump, even though FIAT initially defined an interval of 90,000 kilometers.

My advice would therefore be that, apart from the obvious blondes and devilish peanut delight Snickers, you should try to find a chain cam driven car and free yourself from at least one avoidable headache. If this is not an option, after buying a used car, make sure you perform the belt replacement as soon as possible. Otherwise you risk, as one of my office colleagues found out the harder way, to collect valves, camshafts and piston heads all over the highway only to find out later on that the repair will cost you double the value of your car.
more details about this on wikipedia
read more articles like this